Selby McPhee, author of Love Crazy, tells us how it all began.

While helping my mother and father move out of their house, in their 80s, to a retirement community, I discovered an old box of letters stashed in a closet. The box was marked in my father’s handwriting with a warning: “Personal letters of Mr. and Mrs. J. J. Fleming, Jr. (my parents) – to be destroyed unopened.” Intensely curious, but not wanting to be entirely disrespectful, I asked my father if I could take the box home and read the letters. My father, distracted by all the disruption that comes with moving, said “yes.” 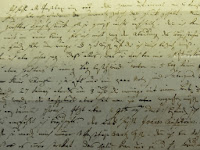 When I began to read the letters, I realized that I had hit upon a gold mine in that upstairs closet. The letters, often beautifully written, offered me a personal narrative of a fabled era in American history – the madcap 1920s, the Depression and World War II – through the daily observations of Jack and Peggy Fleming, who were, incidentally, my mother and father. Those letters were the epistolary source material for my memoir, Love Crazy.

Mining family letters involves some mechanics, some moral questions, and many rewards. Since I wanted to read a chronological story of two lives, and I was working with hundreds of letters, my first task was to order the letters by year and by date and, of course, by author. I used the postmarks on the envelopes to order the letters chronologically, and the handwriting on the envelope to make a first identification of the author. I packaged the letters by year. Then, working in order of date, I transcribed the letters to word documents, reading them as I went along, and by transcribing them making them more readable in a type font, and accessible electronically, for later work.

My intention was to create not just a family record, but a work of literary nonfiction that would be of interest to any reader. In literary nonfiction (I know this because I have by now taken a bunch of writing courses), the writer uses the same techniques she would use in fiction, creating scenes, dialogue, description, narrative and reflection.

To create dialogue, I transcribed each author separately, then read the documents alongside each other, so that I could see an exchange of letters that made a kind of dialogue between the writers, bringing their relationship to life. I had to learn when to narrate the story myself and when to quote the letters, and in narrating, I had to learn when to allow my own emotional response to the story enter in through reflection, and when to temper it. For example, the letters tell the story of the loss of my parents’ first child, a healthy newborn who developed a staph infection in the hospital in Chicago. My father tells of taking the baby’s body to be buried in a family cemetery, while my mother recuperated at home with her family in Philadelphia. When I read that, I was grief stricken and furious at my mother for leaving my father to bury that baby by himself. It seemed important that my own voice, as daughter and author, be a part of the story, but in that case I had to put my feelings at a distance from the narrative. There is, of course, a lot I don’t know about the circumstances at the time.

When the letters mentioned a book or an event, I looked it up. I read a number of books about the wars and the 1920s and the Depression, histories of the schools my parents attended, and I made pilgrimages to the houses in which they grew up, the church in which they had a priest marry them in secret, so that I could see for myself, and describe more accurately the scenes and set their story in the context of the eras in which they lived.

Then comes the moral issue I confronted and which, perhaps, every memoirist or biographer confronts. What right did I have to read the letters saved in an old box marked with the directive that the box be destroyed unopened?

I dreamed recently that my father came for a visit, old and frail, and I asked everyone who might speak to him NOT to mention the book. I hid a box of copies in a junk room, camouflaged, and before the dream ended I was trying to get to the kitchen to hide another copy of the book before he noticed it. The dream obviously speaks to my guilt about exposing my parents, telling their story from my perspective, not theirs. I would rather be in control of my own story, but I fully understand that if my children were to write a book about us, they would put their own spin on it, and I might not like everything they say.

The counter question is, why did my parents save all those letters, leaving them for future generations? Why DO people save letters? So they can go back and read them? Because they are a record of a life that is not yet over? Or do they save them for us? 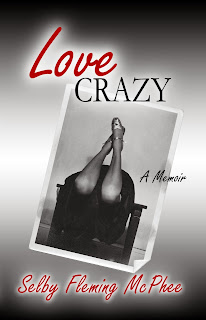 I think my mother would rather have told her own story. I have a little notebook in which she listed major events through the decades, in preparation for what I believe she hoped would be her own memoir. She might have skipped the account of their persistent money problems, their volatile marriage, and her own mental instability, all of which I found important to relate, as it made a madcap romance into a genuine human experience that informed the dynamics of our family today. I think my father, who to the end remained so besotted with my mother and yearning for her approval, would rather have kept their story to themselves.

As I wrote in the beginning of Love Crazy, I wanted to read my parents letters in part because, growing up, I had a persistent feeling that I had missed the party, that I was an afterthought, born when my parents were in their forties and my brother was almost grown up. By taking control of the material, of the story, I have put myself into it, and that was a gift for me. I also wanted to examine the degree to which we are all shaped by our family histories, and from that what I would learn about myself. But most of all, I have come to know my parents not just with that particular lens of an adult child, with all the stored up memories and family dynamics, good and bad, but as a more dispassionate observer young couple full of dreams, who had bad luck and hard times, and I feel enormous compassion for them, and gratitude, as a daughter, for all they did, and all the courage it took, to get up and keep going.

Posted by Martin Sisters Publishing at 12:00 AM